George Washington Davis1He was usually referred to as 'Washington Davis,' while the names 'George Washington Davis' or 'G. Washington Davis' occasionally appeared in documents. He was better known by friends and neighbors as 'Washie.'(1845-1928) was a formerly enslaved African American man who lived on Cape Ann in the late 1800s and early 1900s and was one of the few people of color residing here during that time..
As far as he could recollect, he was born a slave in Virginia in March 1845 the son of an enslaved woman named Sally Davis. He had at least one sibling as he recalled “his mother, with her baby clasped in her arms, sold and carried away in a wagon.”2'Washie' Davis a Feature in Town. Interview with Mr. Davis, Rockport Daily News, 9 Nov., 1923.Records of slave ownership are imprecise and incomplete and to date there is no sure way to pinpoint his early years3'There are at least four possible contenders: that a son was born to Sally wife of Abram who, with their two children (Susan & Rebecca) were bought by Henry Davis, a Virginia slave owner, Mar. 3, 1845. Public Sales of Negroes Stock &c. at Oakland belonging to William R. Johnson by Thomas Branch & Bro., Petersburgh, VA. George, aged 16, who escaped from Bartholomew Bowers Oct. 20, 1862; George aged 15, who escaped from Jordan Edwards Aug. 10 1862; Washington aged 10, who escaped from William H. William, Aug. 20, 1863. Slaves Escaped in Southampton County to the enemy during the war. Virginia Untold, virginiamemory.com. In many ways the rest of his life is equally obscure and entwined with that of John D. Sanborn a wealthy Rockport resident. 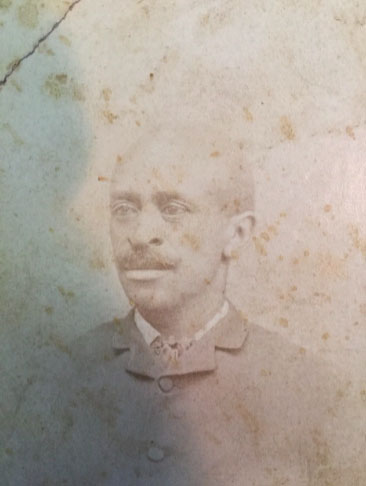 Washington Davis. Courtesy Sandy Bay Historical Society
When Davis was about sixteen, he made his way to Fort Monroe (then under the command of Gen. Benjamin Butler). It is possible that Davis may have been among those who fled to Fort Monroe and its “contraband camp” to escape enslavement;4Contraband camps were a phenomenon of the Civil War. They were refugee camps set up by Gen. Benjamin Butler to protect fleeing slaves from recapture. Butler argued that as Virginia had seceded from the Union he was under no obligation to enforce the Fugitive Slave Act of 1850 which would have resulted in returned slaves being forced to support the Confederate cause. In addition he argued that as the Confederacy defined enslaved people as property he was justified in regarding them as 'contraband of war.' Contraband Camps and the African American Refugee Experience during the Civil War. oxfordre.com/americanhistory or he may have been the Washington Davis cited as having fought as a private in a New York Regiment and been wounded.5Washington Davis is #4 on a list of 12 surviving Civil War veterans living in Rockport in 1890. He was a private in a New York Infantry Regiment, no company or dates of enlistment or discharge given, who received a wound from a shell. Davis makes no reference to any military service in the 1923 interview with him nor is there a mention in his obit in 1928. Newspaper clipping Sandy Bay Historical. However, there is no other person with either the name George or Washington Davis resident in Rockport in the town directories around 1890 or the censuses of 1880 and 1900. Veteran Schedules of US Federal Census, 1890, Rockport, MA. Special Schedule, Surviving Soldiers, Sailors, and Marines, and Widows, etc. of the war of the rebellion, in Rockport, Essex, Mass. Enumerated June 1890. Ancestry.com However he arrived, he soon went to work for the Adams Express Company, probably as an errand boy.6'Washie' Davis a Feature in Town. Interview with Mr. Davis, Rockport Daily News, 9 Nov., 1923. Founded by a Boston man, the company was soon transporting “Bank-notes, gold & silver coin, parcels, packages, freight, & c.” the length of the East Coast and as far west as St. Louis.7Adams' Express Company was founded by Alvin Adams in 1839 as Adams & Company changing the name to Adams Express Company in 1855. en.wikipedia.org Northern abolitionists sent anti-slavery newspapers to southern readers through the company and once an enterprising enslaved man gained his freedom by shipping himself north from Virginia by Adams Express. 8This was Henry 'Box' Brown in 1849 who shipped himself to Philadelphia. 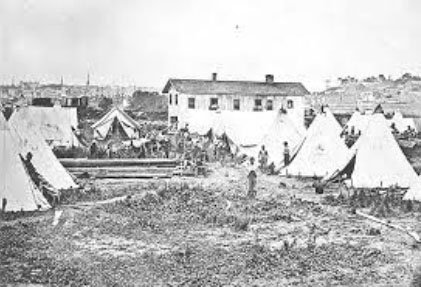 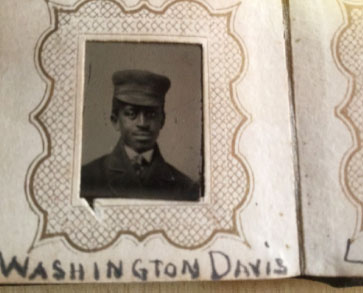 At Fort Monroe, Davis made the acquaintance of John D. Sanborn an agent for the Adams Express Company where, according to a small announcement in the New York Herald on June 16, 1861,:
“An office of Adams & Co’s Express has been established here [Fort Monroe] for the accommodation of the soldiers. Mr. JD Sanborn has charge of the office here, and he will receive and deliver all packages directed to Fortress Monroe, Old Point Comfort, Virginia. He is in daily communication with both camps and will promptly deliver every article entrusted to his care.”
The company was already acting as paymaster for both the Union and Confederate sides and when the Post Office stopped carrying the mail to the Confederate states in May, it was transported by Adams and other private express companies under a Flag of Truce. It was reported by the same New York newspaper that on June 24 “Mr. Sanborn, the agent of Adams Express Co. at Fortress Monroe” was on the USS Fanny en route to Norfolk, VA, “on business connected with his department” sailing “under a flag of truce.”9Report in the New York Herald, 25 June, 1861.
John D. Sanborn was from Rockport, MA. Born in New Hampshire in 1821 he had moved to Rockport with his family at a young age. He married a Rockport girl, Laura Ann Tarr in 1849 and settled into his job as an expressman. Although never a member of the armed forces, he frequently spent time in Virginia during the war years on company business, and in 1863 was appointed special provost marshal at Fort Monroe by Gen. Benjamin Butler, with whom he had become friends.10Announcement in the Lowell Daily Citizen, 1 Dec., 1863. Mr. Sanborn is also mentioned in letters between General and Mrs. Butler in 1864. Private and Official Correspondence of Gen. Benjamin F. Butler During the Civil War, Ben. F. Butler & Jessie A. Marshall, 1917. www.google.com By war’s end in 1865 he was back at home in Rockport and had brought Davis home with him. In the state census of that year Davis gave his age as eighteen and was still employed as an errand boy. 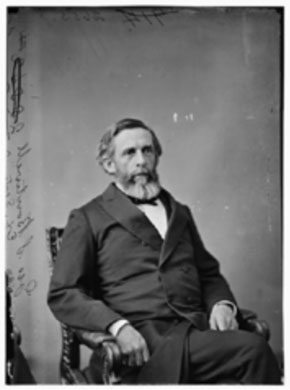 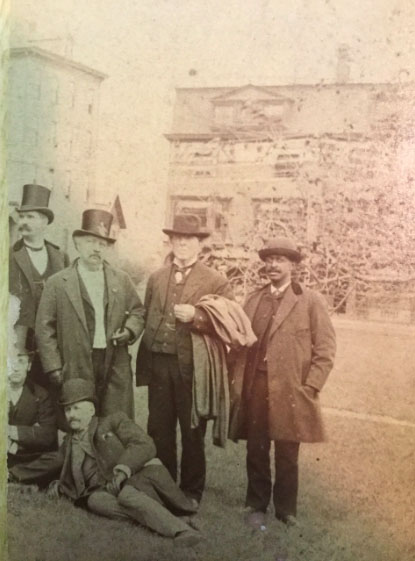 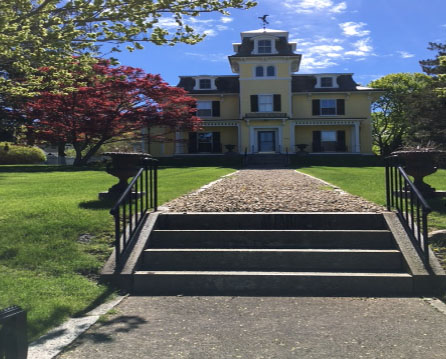 19 Pleasant Street, Rockport. Washington Davis lived at the John D. Sanborn House or on its property 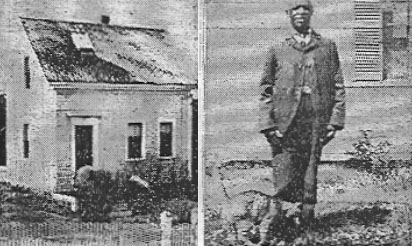 The 1900 census shows Annie, her husband Fred A. Stimson, and their two children living in the family home on Pleasant St. The same census lists Davis as a day laborer residing with Levi Malonson and his family at 8 High St.25Levi Malonson was a 28 year old mason with a wife and 4 young children. Both he and his wife were Canadian immigrants. There was one other boarder in the house: a 39 year old farm laborer named Albert Tebow from Nova Scotia. 1900 census & marriage record. Ancestry.com while the Rockport directory for that year describes him as a hostler owning a house on “Pleasant, beyond Marshall St.”
It is not clear when Davis actually first occupied the house. He continued to be listed in the directories as Washington Davis, laborer, house Pleasant beyond Marshall St. until 1913 when the ‘private way’ is named Spring Court and his house as number 1. That changes to number 4 in 1915, presumably with the building of new houses on the street and remains the same until his death at the age of eighty in 1928. The current address is 4 Spring Lane.
During those years Davis took out three mortgages on the property with the Granite Savings Bank of Rockport for a total of $350.26The first was in 1911 for $150, the second in 1915 for $100, and the third in 1925 for $100. Salem Registry of Deeds Bk. 2111 p.31, Bk. 2271 p.387, Bk. 2662 p.326. salemdeeds.com Each of them had a duration of one year at 6% interest, but he does not seem to have repaid them as each new loan cited the existence of the prior ones and they were not officially discharged until 1936.27Salem Registry of Deeds Bk. 3074 pp.30-31 dated 15 May, 1936. salemdeeds.com Davis did not sign these documents, just made his mark. However, as he was described as able to read and write in the 1900 census, this may have been due to physical difficulties rather than illiteracy; given that he was probably already showing signs of the disease that eventually took his life. 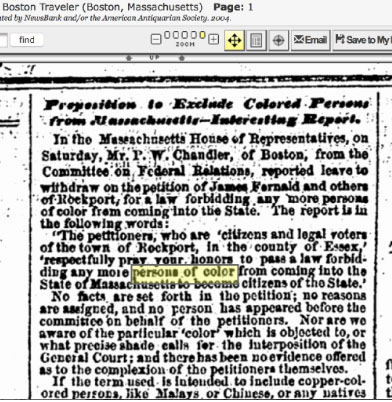 The Boston Traveler reported that a petition generated from Rockport requested that a law be passed “forbidding any more Colored Persons” from becoming Massachusetts citizens. 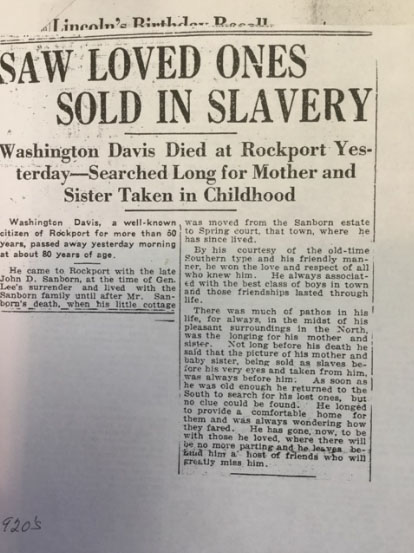 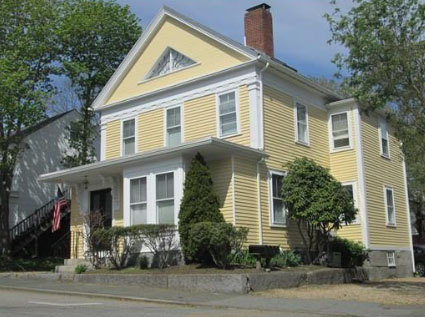 8 High Street, Rockport, MA, in the 1900 census, listed as the home Levi Malonson and his family, in which Washington Davis resided.

Davis Leaves his Home to Annie

The year before he died, he was still listed as living in his house, but he died at 44 South St., the Town Poor House (now Oceanside Rehabilitation and Nursing Center; formerly the Den Mar Health and Rehabilitation Center), and cause of death was cerebral sclerosis, a form of multiple sclerosis. This implies that, given his age and despite his stated profession of laborer, he may have been unable to work and took out the mortgages as a way to acquire necessary money, especially as his adopted family were no longer nearby. John D. Sanborn (who, oddly enough, also died of cerebrospinal sclerosis) and Laura were long gone28Laura Sanborn had died in 1885 and John D. in 1897. Rockport Vital Records Deaths while Annie had moved to Rhode Island to live with her married daughter.291925 state census, Westerly, RI. Annie aged 64 & Fred aged 70 are living with daughter Gladys and her husband William Clarke. Ancestry.com Although no will has yet been found, Davis seems to have left his house to Annie, who died before 1954 when her executors sold the property described as “Being the same premises described in deed of Frank Jones to Washington Davis, dated July 16, 1896.”30Salem Registry of Deeds Bk. 4182 p.110 dated 13 Dec. 1954. salemdeeds.com George Washington Davis was buried in the Sanborn family plot in Beech Grove Cemetery, Rockport. 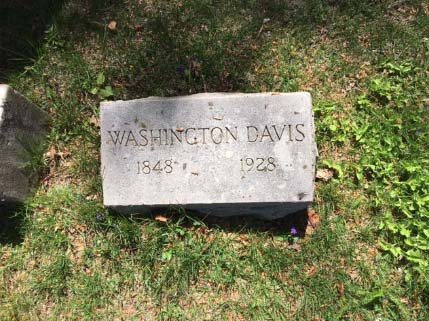 Washington Davis’ gravestone lies in the Sanborn–Stimson lot at the Beech Grove Cemetery, near the intersection of Grove and Beech Avenues, plot BG 7-88.