The Cape Ann Slavery and Abolition website aims to reveal the hidden history of enslaved people, slaveowners, slave traders and sea captains, business owners involved in, or benefitting from, the slave trade on Cape Ann, and to tell their stories. Using contemporary research and primary sources, we present evidence-based information that has been overlooked, suppressed, or erased from local historical narratives. 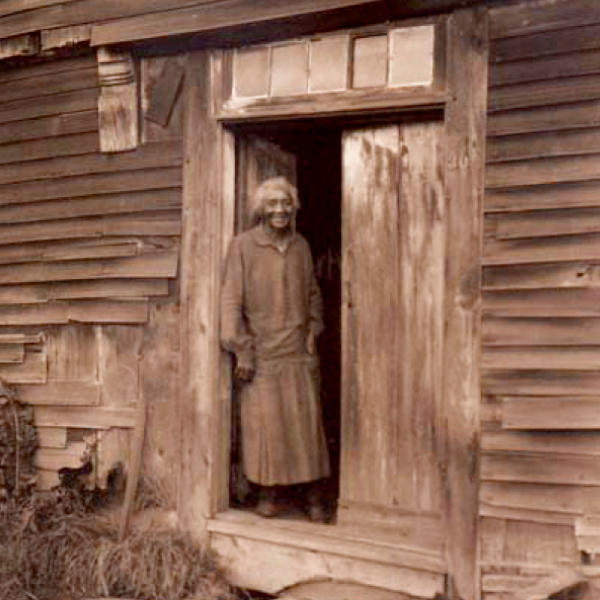 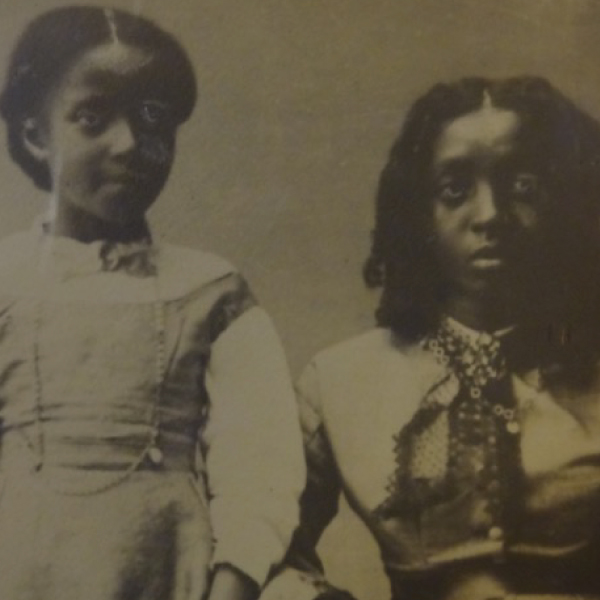 Harriet P. Johnson with her mother, Harriet F. Johnson ca.1865
courtesy of Wellspring House
We invite a reexamination of common beliefs and assumptions about enslaved people, and the industry of slavery on Cape Ann. We also invite you to discover a new appreciation for hidden heroes of the abolition movement and for the survival and resilience of the families of freed slaves on Cape Ann. By offering these documented accounts, we seek a reckoning with the past that is too often denied.
Like other communities in the American colonies, Cape Ann was involved in the exploitation of human beings as a form of forced labor. Slaves, or “servants for life” as they were often euphemistically referred to, lived and worked on Cape Ann, were born, married and died here. Cape Ann’s slave-owning tradition and roles in the international slave trade constitute a hidden history, however, largely omitted from narratives of the past. 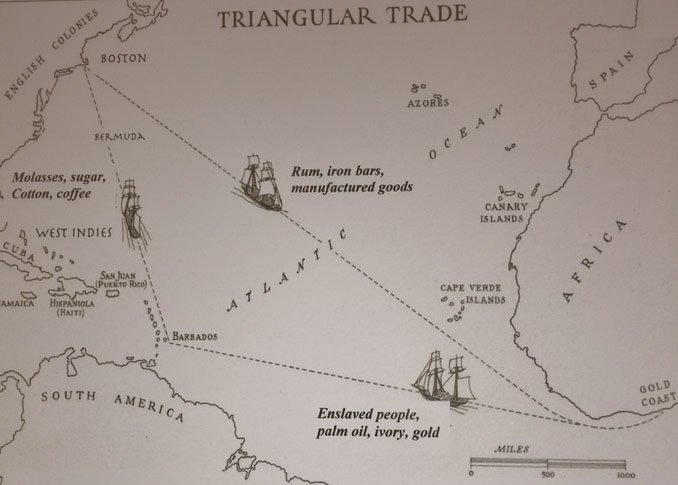 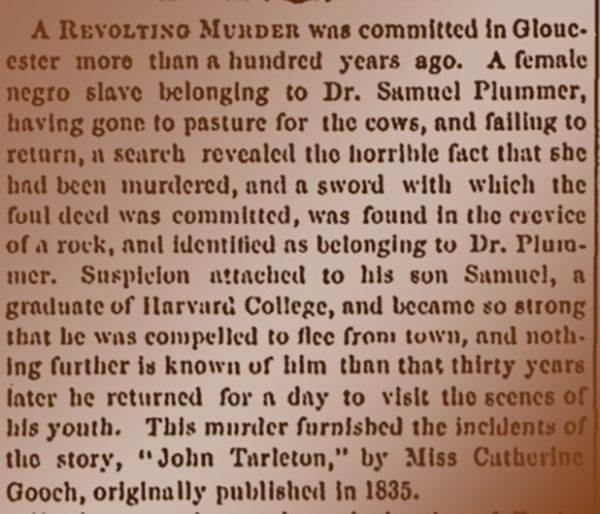 Newspaper story of a ‘revolting murder’ of a ‘female negro slave’ on Cape Ann decades after the alleged event
Cape Ann Advertiser, April 22, 1877
In John Babson’s 1860 History of Gloucester, for example, the word slave occurs only once—in the context of identifying a murder victim.1Babson, John James, 1860, History of the Town of Gloucester, Cape Ann: Including the Town of Rockport, p. 293. The word slavery also occurs once, but only in association with selectmen’s outrage against the 1773 tea tax—a famous prelude to the War of Independence. Their complaint was that the British were attempting to reduce English colonists to a condition of slavery.2Babson, 1860, p. 369. Even local vital records reveal little about the subject beyond a few baptisms and transfers of people as property in wills.3Gloucester MA Vital Records to the end of the year 1849: http://www.mavitalrecords.org/MA/Essex/Gloucester/.

Cape Ann is in Essex County in northeastern Massachusetts and includes the City of Gloucester and the towns of Essex, Manchester-by-the-Sea, and Rockport. The area was first occupied by the English in the 1620s and Gloucester, incorporated in 1642, is one of the oldest seaports in the United States. It was the intention of the Massachusetts Bay Company to make Gloucester Harbor the hub of an international trade network that would carry goods between Canada and Virginia via the “Cut”—a canal on the Annisquam River, an inland waterway connecting the Gulf of Maine with Massachusetts Bay.4Commonwealth of Massachusetts Archives, 1850, Volume I: Records of the Company of the Massachusetts Bay in New England. From 1628 to 1641: http://archive.org/details/recordsofcompany00mass; also Brenner, Robert, 2003, Merchants and Revolution: Commercial Change, Political Conflict, and London’s Overseas Traders, 1560-1653 (Verso). See especially Chapter IV, The New-Merchant Leadership of the Colonial Trades. 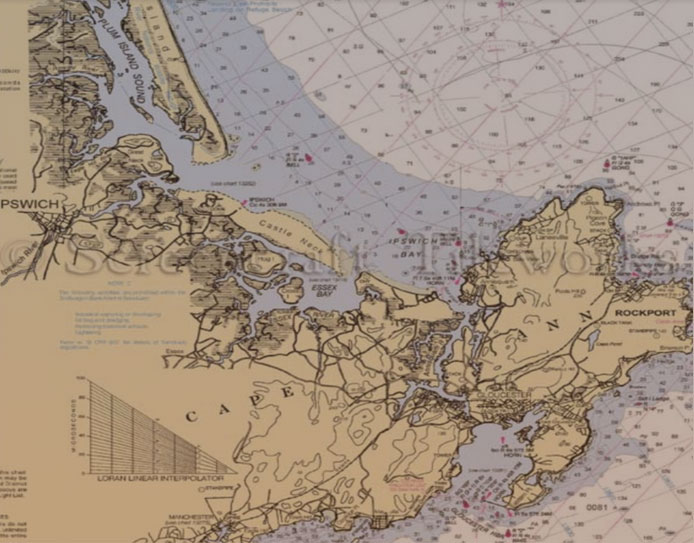 Nautical Map. Cape Ann, Massachusetts. OBX Trading Group. Nautical Map.
Slavery has had a profound and lasting impact on the development of modern America. According to the National Museum of African American History, slavery made possible the factory system, in which mass production using raw materials and cheap labor created a steady supply of inexpensive consumer goods and transformed the United States into a world power. Enslaved persons, as an unpaid labor force, represented vast wealth, upon which the underpinnings of the nation were laid. Every American lived a life touched by slavery. Indeed, every American, regardless of race, is still living with the legacy of slavery.

From Cape Ann Guide 2013: http://www.mobilemaplets.com/showplace/11131
We hope this examination of the history of Cape Ann seaports and communities will contribute to an understanding of slavery in the North, and its ties to the international slave-based economy. We hope to bring to light local people who endured slavery, as well as those who sought to profit from it, and those who did their best to end it.
The legacy of slavery is still with us. The Cape Ann Slavery and Abolition website is dedicated to explore that legacy and see how we are all affected by our shared history.
Not everything that is faced can be changed;
but nothing can be changed until it is faced.

-James Baldwin, from “As Much Truth as One can Bear”